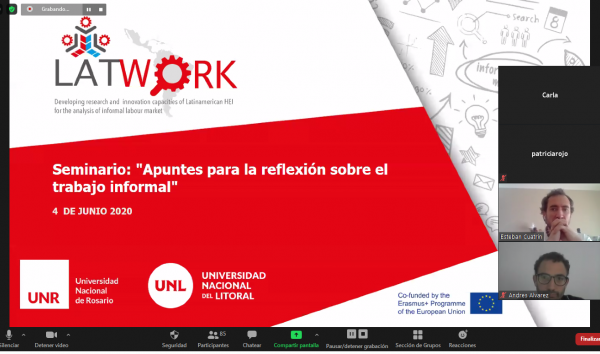 On Thursday at 10 am., ERASMUS + Latwork Project’s university members assisted an online seminar called “Notes on informal labour’s reflections” which was in charge of Universidad del Litoral and Universidad Nacional de Rosario, both from Argentina.

Firstly, Nicolás Montiel, graduate from International Relations – UNR, introduced Latwork Project’s principles and objectives as well as researches underpinning it. Among the objectives he stressed the creation of a multidisciplinary informal economy and labour centre in each of the Project’s member universities; innovation regarding methodologies in order to raise the research results’ impact; training in research and innovation regarding informal labour market field; and, finally, the creation of a LATinWORK network for regional research regarding informal economy and employment. Then, Esteban Sperati, specialized in Economy and Rural Territories from UNL, presented his work called “Theories of labour market segmentation: a revision on different perspectives”. He explained understandings of the concepts of segmentation and institutionalist approaches which took place in the 20th century.

Secondly, Andrés Alvarez from the CIET and UNR presented “Social and political perspectives on informal labour”. He made a brief overview of main concepts and presented, as contributions, three items: 1) labour informality approach in Cambiemos’ speech (Argentina) 2) The emergence of CTEP 3) Social conflict and resistance. As conclusions, he reviewed perspectives and challenges for Argentina’s new government and the COVID-19 irruption

Finally, Andrea Delfino, Doctor in Political Sciences from the UNL and researcher of IHUCSO Litoral and Paulina Claussen, graduate on Economy from the UNL and currently doing a PhD in Social Sciences at UNER, presented “New informalities and new labour institutions”. They made a brief review on platform workers’ working conditions, stressing the COVID-19 impact. The presentation was concluded with old and new platform economy’s issues, among which the following can be mentioned: 1) new technologies imply new productive processes and, in consequence, new working regulations; 2) Non-neutrality of technologies in force relations among different social groups; 3) Analysis of working regulations in Argentina: Support of entrepreneurial capital Law from 2017; and 4) The new working subject ethos materialized in the entrepreneur figure.

Activity was lead by Carolina Martínez, graduate form International Relations UNR, and, as a conclusion and closure, the CPN and UNL professor José María Chemes, gave his thoughts on the addressed issues during the encounter.